Hi, my name is Thelma and I will be your host.  We have an exciting show for you all today with lots of wonderful character interviews from so many different books.

Let’s welcome Mattie Hathaway and Dan Richards to the show to start things off.  They are the stars of the Amazon best-selling novel, The Ghost Files written by Apryl Baker.  They are going to tell us a little about the book and the roles they play.

Thelma:  Let’s start with Mattie.  Can you tell us a little about yourself Mattie?
Mattie:  Um, what if I don’t want to?
Dan:  Squirt, just the answer the questions and stop being a brat.
Mattie:  Make me. Thelma:  Easy question first.  What describes you in a nutshell,

Mattie:  Shut up! There is nothing wrong with Pengy!

Dan:  (shakes his head) Five minutes of my life I’ll never get back Googling that thing.

Thelma:  That is just adorable!
Thelma:  (chuckles) Let’s get back to the interview.  I understand your hesitancy to talk, Mattie.  It’s not everyday we meet a real live ghost whisperer.
Mattie: (glares at Thelma) Did we really have to go there first?
Dan:  Mattie is sensitive about her…er…gift.
Mattie:  (laughs outright) Dan has issues accepting the fact I can see ghosts.  He doesn’t really believe in things that go bump in the night.
Thelma:  Have you always been able to see ghosts?
Mattie: No it started when I was five.
Thelma:  Can you tell us a little bit about it?
Mattie:  (sighs loudly) Well, as you know I grew up in the foster care system.  When I was five, my mom went nuts and tried to kill me.  She stabbed me and when I woke up, I could see the little buggers.

Thelma: Wow, that had to be scary.
Mattie:  (shrugs) No big deal.
Dan:  It is a big, deal.  That event shaped her into the person she is today. She’s tough as nails, more street savvy than the average sixteen year old girl, and she hides behind all the walls she put up.
Thelma:  It sounds like you know her pretty well, Dan.  I bet that wasn’t an easy task.
Dan:  You just don’t know the half of it.  Mattie is…well, she’s a handful.
(Mattie kicks Dan, causing him to glare at her.)
Mattie:  I am not a handful, I just don’t take crap from anyone.  When you grow up in the system, you learn to defend yourself.  It’s not my fault I’ve had to fight on more than one occasion over the years.

Thelma:  So how did you two meet?
Dan:  I was one of the police officers who interviewed her when her foster sister, Sally, went missing.  No one else believed her when she said the girl didn’t run away, but I did.  There was just something about her frustration that rang true.  Then when she started spouting off about Sally being killed and needing to find her killer, I knew there was something going on she wasn’t telling me.  I just never expected it to be the bombshell she dropped on me.  Do you believe in ghosts, Officer Dan she asked me.  (Shakes his head) I still can’t believe it sometimes.
Thelma:  Was it hard to open up to him about your gift, Mattie?
Mattie:  I still blame my blabbing about it on the drugs. He met me in the hospital after I’d had a run in with Mirror Boy.  Up until then I didn’t know ghosts could hurt you physically, but boy was I ever wrong!  They can do some serious damage.  Anyway, I found myself just blurting things out that night and then he wouldn’t leave it alone.  He left me no choice but to tell him.
Dan:  (chuckles with amusement) I thought you said it was my eyes?
Mattie:  What?
Dan:  You talk in your sleep, Squirt.
Thelma:  Are you two…you know together?
Mattie:  No, we’re just good friends.  Dan has stayed with me a few nights in the hospital to keep me company is all.  He shouldn’t be repeating things he hears people mutter in their sleep, though.  It’s rude!
Thelma:  So back to Sally.  Dan believed you about her not running away?
Mattie:  Yeah. I knew she didn’t run away because I saw her ghost.  She had her hands bound behind her back and her mouth was taped over, but it was the bullet hole in her head that made realize something bad had happened to her.  I had to find out what happened to her.
Thelma:  It sounds like it was very important to you.
Mattie:  Yeah, foster kids take care of each other.  We depend on each other and she needed someone to find her, to let people know she wasn’t just another statistic.  I had to help her even if that meant talking to the ghosts for the first time in my life.  Usually, I just ignored them and they went away, but now they know I see them and I can’t get rid of them. They pop up all the time and the most unexpected moments.
Thelma:  Did you find out what happened to her?
Mattie:  (grimaces)  Yeah, a serial killer had murdered her and then I got taken captive by the killer.  It’s not a pleasant memory.
Dan: It isn’t for me either.  Worst three days of my life.  I went nuts trying to find her.
Mattie:  You?  You weren’t the one who was being tortured!
Thelma:  You were actually kidnapped and tortured by the killer?
Mattie: Yes, but I’d rather not talk about that.  It brings up too many painful memories.
Thelma: I understand completely.  It must be very hard.
(Mattie nods and looks off into space.  Dan takes her hand and squeezes it causing her to smile at him.)
Mattie:  Yeah, it is most days, but I finally have people who care about me and that helps a ton.
Thelma:  I take it Dan is one of those people?
(Mattie nods.)
Thelma:  So do you two think you’ll ever hook up in the future?  You’re so cute together.
Mattie:  I’m not sure.  He’s very important to me and I love him, I just don’t know if I love him like that or not.  I don’t do feelings usually.  I know everyone expects me to be this mature person with all this depth because I grew up in the system and I survived being taken captive and tortured, but I’m still just a sixteen year old girl.  I still have the same insecurities and doubts every other sixteen year old has and I get scared sometimes. I usually do stupid stuff when I get scared and lash out at people, but Dan stuck around.  He’s family no matter what else might happen in the future.
Thelma:  And you Dan, what do you think?  Will you and Mattie have a relationship in the future?
Dan:  I’m in for the long haul whether that means we are life-long friends or if it develops into something else.  Right now we’re friends.  I mean, I’m twenty and she’s only sixteen. She’s still jailbait.  But I plan on…
Thelma:  Shh, Dan, don’t give it away!  I have a feeling that we’ll be hearing more from you in the future, but for right now, let’s end it there and leave everyone hanging.
Mattie:  (laughs) I knew I liked you!
Thelma:  Thank you both so much for joining us today and sharing a few things!  And thanks to DelSheree Gladden for hosting our show on her blog!
Mattie:  (jumps up and waves her hand before the camera pans away) Wait, you didn’t let me tell you about the giveaway Apryl is hosting!
Thelma:  Oh, my I forgot!
Mattie:  I did promise I’d tell everyone about it, even though I’m mad at her for all the nonsense she put us through when she wrote the book.  She is trying to get 1000 likes on her Facebook author page so she’s hosting a giveaway.  Like her page for a chance to win a signed edition of my story, The Ghost Files.
(Flashes card with the website at the camera)

Dan:  Uh, we forgot something else!

Thelma:  (frowns at them and glances at her watch)  Go ahead, Dan.

Dan:  First here’s a little bit about Apryl Baker, our creator who we usually love, but sometimes want to strangle for putting us in certain situations… 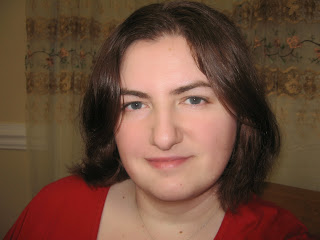 So who am I? Well, I’m the crazy girl with an imagination that never shuts up. I LOVE scary movies. My friends laugh at me when I scare myself watching them and tell me to stop watching them, but who doesn’t love to get scared? I grew up in a small town nestled in the southern mountains of West Virginia where I spent days roaming around in the woods, climbing trees, and causing general mayhem. Nights I would stay up reading Nancy Drew by flashlight under the covers until my parents yelled at me to go to sleep.
Growing up in a small town, I learned a lot of values and morals, I also learned parents have spies everywhere and there’s always someone to tell your mama on you. So when you get grounded, what is there left to do? Read! My Aunt Jo gave me my first real romance novel. It was a romance titled “Lord Margrave’s Deception.” I remember it fondly. But I also learned I had a deep and abiding love of mysteries and anything paranormal. As I grew up, I started to write just that and would entertain my friends with stories featuring them as main characters.
Now, I live Huntersville, NC where I entertain my family and watch the cats get teased by the birds and laugh myself silly when they swoop down and then dive back up just out of reach. The cats start yelling something fierce…lol.
I love books, I love writing books, and I love entertaining people with my silly stories.
PS: DO NOT GET IN MY WAY IF THERE IS A SALE ON AT TARGET – my home away from home!
Well you can catch up with Apryl at any of these places:
Amazon: Ghost Files
Amazon: The Promise
Amazon: The Awakening
Twitter
Facebook
Goodreads
Wattpad
Blog
Chicks Writing Rockin’ YA
Limitless Publishing
Linked In
Google +
Pinterest

And don’t forget to check out her other books! 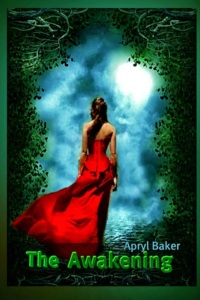 Thelma: Okay, thanks so much for reminding us of that, Mattie!  Thank you both and lets hear it from our sponsor, Writer’s Anonymous, for those who just have a problem with writing way too many stories at one time!

11 thoughts on “Character Interview: Dan and Mattie (The Ghost Files by Apryl Baker)”