I’m so excited to share that a lovely friend on mine was recently recognized for her wonderful book!

“Part love story and part comedic hero’s journey, the story is filled with quirky and diverse
characters and unlikely situations right out of real life. A fun read from start to finish.”
—Anne Hillerman, author of the Manuelito, Chee and Leaphorn mysteries.

A comic novel about second chances, redemption and finding latein-love love, Getting New Mexico tells the story of Aaron Schuyler, a drunk, cheat, exploiter and — worst of all — a lifelong New Yorker, whose life and character is transformed by the quirky, anti-elitist culture of New Mexico.

After his alcoholism and wayward behavior lose him his family, livelihood and home, Schuyler is forced by his formidable Winston Churchill-worshipping mother to move to Santa Fe. Schuyler finds himself in a culture where self-reliance and compassion counts more than power or status. Stripped of his former wealth and reduced to wearing clothes from Walmart, Schuyler finds that people no longer excuse his bad behavior. With his survival depending on keeping a real job, Schuyler is forced to develop new habits of responsibility and sobriety.

Along the way, Schuyler meets unconventional people unlike any he’s ever known — the enigmatic Indian artist Lone Goose; his aloof landlord who was the lover of Schuyler’s beloved uncle; the blue co llar Sam’s Club workers who accept him as one of their own; and above all, the beautiful and no-nonsense Anita Chatterjee, HR director at Sam’s Club, with whom Schuyler is immediately smitten. For the first time in his life, Schuyler wants to be a better person — and shaking scorpions out of his boots seems like a fair trade.

I will be signing copies of my award-winning novel, Getting New Mexico, at Amy’s Bookcase in Farmington, New Mexico on Saturday, November 27 from 10:00 a.m. to 12 noon.

Getting New Mexico was a winner in fiction, and was a finalist for Book of the Year.  I hope to see you at Amy’s!

About the Award and Author

New Mexico Book Co-Op is New Mexico’s largest not-for-profit volunteer organization serving authors and publishing professionals, the New Mexico Book Co-op numbers over 1,200 participants. Since 2004, the New Mexico Book Co-Op has executed its mission to showcase books, authors, presses, and related professionals; to promote literacy; and to raise public awareness of quality books produced in the Southwest. In 2007, the Book Co-op launched an awards program for excellence in books, which is now one of the largest and most prestigious programs in the Southwest, attracting entries from across the region as well as from major national presses.

Rhenna St. Clair, a Portland, Oregon, native, arrived in New Mexico in 1992. Fascinated by the beauty of the land and its history, the archaeological sites and the mix of cultures, she “can’t imagine living anywhere else.” A retired acupuncturist and Doctor of Oriental Medicine, St. Clair has traveled in China as well as in India and other parts of Asia. She now resides in northern New Mexico. Her poetry has been published in Perspective(s) Magazine, the literary journal of San Juan College. Getting New Mexico is her first novel.

Being oblivious to all the signs that your life is about to fall apart doesn’t stop it from happening to Sara Taylor.

Alone except for the Siamese cat her boyfriend—ex-boyfriend—Joseph left behind to teach her a lesson, Sara has no clue how to survive on her own. She hasn’t handled her own bills in years, can’t meet a deadline without someone else programming alarms into her phone, and is constantly either losing important things or getting herself hopelessly lost. Sara has no idea how she’s supposed to move out of her university apartment and start her first real job without someone there to hold her hand.

Although she knows her new friend Monroe would step in to help, she’s not about to call him after having thrown him out of her apartment when his suspicions about Joseph prove true and Sara is left angry and mortified. It doesn’t take long before she is desperate to lean on someone else’s strength, even for just a few minutes, as real life begins to overwhelm her. Pride forces her to either sink or swim, even when sinking seems the most likely outcome.

The Oblivious Girl’s Handbook is available as a novella in the “Christmas Pets and Kisses 2” box set and as a full novel, where Sara faces the difficulties of a new relationship while barely holding onto being a real adult for the first time in her life. 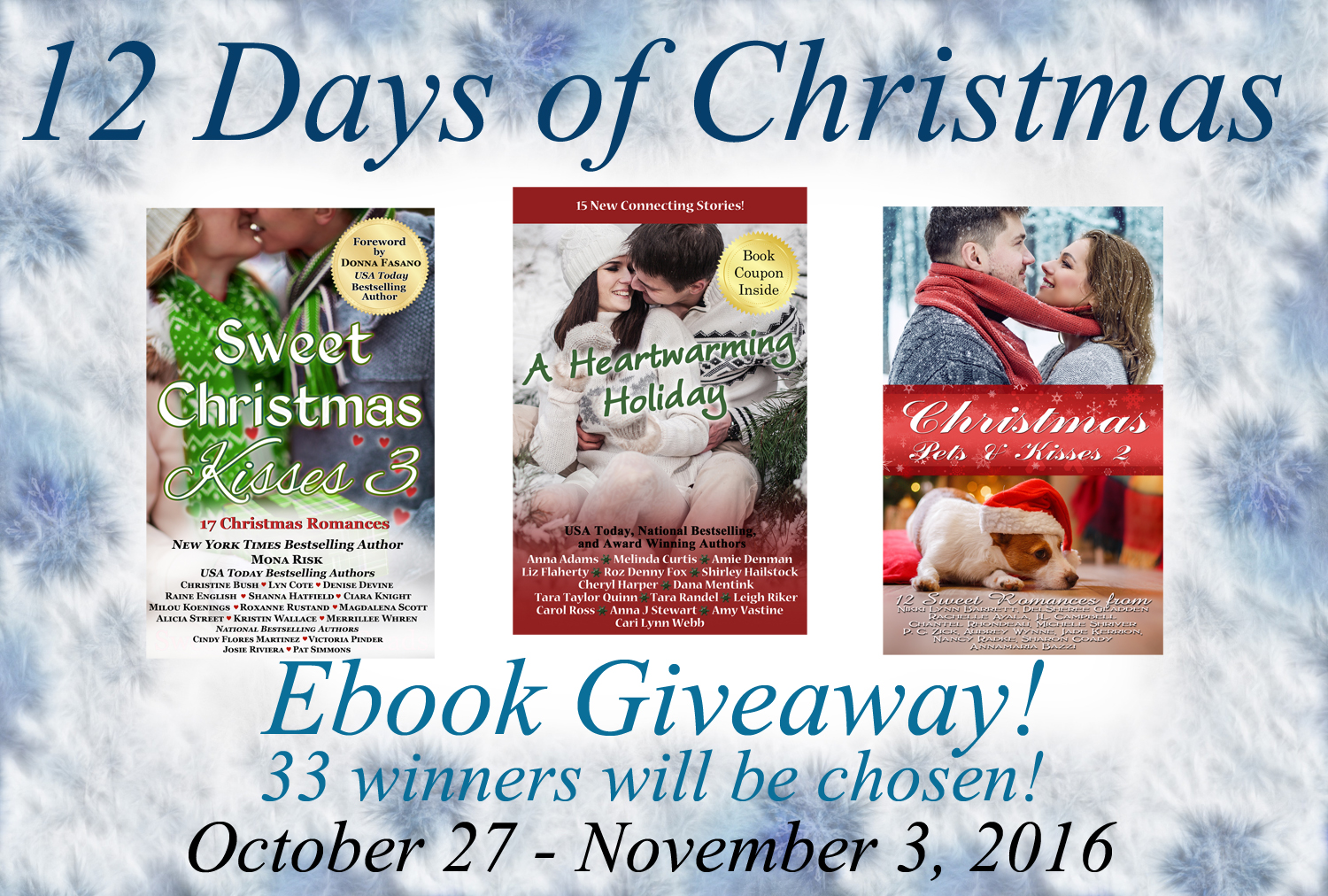 If you’re in the mood for Christmas already and want to win some eBooks, check out the giveaway and enter to win!

Look what’s FREE for the next 5 days!! Grab Shark Out Of Water now before it goes back to full price 🙂

It’s taken me a long, long time to finally get around to cleaning this book up and putting it out there, but Memory’s Edge is finally up for pre-order and will release on Kindle and #KindleUnlimited on August 21st!

Can’t wait to share this one with all my readers!!

I’m finally going to do something with book! Not sure on an exact release date yet, but late summer sounds likely right now. Stay tuned!

This will be a standalone book, so no waiting for the rest of the story!

I gave up doing my book review blog a while ago, mainly do to time constraints, but I thought I would share a few of my favorite series.

Romance, drama, and intrigue, anyone?

This whole Rose Gardner Mystery series is awesome, including the between the pages novellas.

Hilarity and mystery, with a dash of romance.

The Miss Fortune Series is just the best. I usually laugh my whole way through as I enjoy the twisty-turny mysteries, and my favorite Deputy 🙂

The Sydney Rye series is a little darker than the first two, but gives readers a realistic heroine who’s made mistakes, but is a survivor even when she might not want to be.

Clearly I’ve been very into mysteries lately, but that doesn’t change the fact that these are all great series. Enjoy!

This poor book has been languishing in my computer files for a long time, and I think I’m finally ready to do something with it. I made a cover for it, anyway! I’d love to hear everyone’s thoughts.

And now, here’s a little about the book!

Rule #2: Obey the leaders, or become exiled into the nuclear war-decimated wasteland.

Rule #3: Never bring an outside back to the village.

Harmony has always had a tough time blindly following anyone, let alone the village leader intent on seeing her exiled. So when she stumbles across a not-quite-dead body during a scavenging hunt, she’s determined to take him back to the village. The other members of the hunting party tell her to leave him, let him die, it’s too risky. Even Pace is wary of helping her. He knows what the price of her aid will be.

Harmony refuses to let the emaciated and strange looking man die alone in the desert. That’s not the only reason. After having been told her whole life that they were the only humans left in the ravaged Southwest, possibly the world, she wants nothing more than to expose Luther for the liar he is.

For most of the villagers, survival is all that matters. They wear themselves out, day after day, just trying to stay alive. Harmony asks herself daily what the point of staying alive and safe is when it only inflicts misery. Her desire to share this one small truth and give hope to the villagers, backlashes when Luther finds out. His son, Zen tries to step in on Harmony’s behalf, but Luther is relentless.

So is Harmony. She now knows the truth is somewhere outside the walls of the village, and she won’t stop until she finds it, with or without Zen and Pace’s help.

Not totally sure on the release date yet, but it’s looking good for this summer!

Gretchen brought her car to a screeching halt in the middle of the highway, terrified she had just killed someone. The body lying on the road appeared so suddenly, she barely had time to hit the brakes. Luckily, she stopped short of him. Unluckily, someone else hadn’t. Her call for help may have saved his life, but the damage done may be impossible to repair.

Waking with no memory of who he is or how he ended up a broken mess in the hospital, he has no choice but to rely on his rescuer for help. “John Doe” is his only identity until fragmented memories begin cropping back up. They are only fleeting images of a woman, but John hides even that from Gretchen, afraid it will lead him back home and away from the woman he is quickly falling in love with.

Today I’m excited to welcome Tina DC Hayes to my blog for a guest post!

(Valentino is a fictional character who stars in a novella by Tina D.C. Hayes, Valentino, Be Mine, which is included in the Valentine Pets and Kisses Box Set.)

Breed and Description: Male teacup Yorkshire terrier who weighs under 3-1/2 lbs soaking wet. Cute, smart, affectionate and loving, and he enjoys getting his way.

Occupation: Starred in commercials for Yummly dog food until he retired a year ago due to the brand changing spokesdog breeds from Yorkies to French bulldogs.

Education and Skills: Along with basic obedience and agility, Hollywood trainers taught him plenty of tricks he performed on command in front of the camera. He can sit and stay (though he prefers not to), shake hands, walk on his hind legs, jump through hoops, and look adorable even when in a bad mood.

Goals and Problems: Valentino needs a new home, but isn’t sure who his new person is going to be. Kaylee has dog-sat for him plenty of times and he already loves her bunches, but he likes Carter too, and has spent a lot of time with him at the bar when his former owner was busy with clients. Valentino doesn’t understand why those two can’t get along and play nice, but he’s happy to be the center of attention.

Sparks fly when two people wind up looking after a rambunctious Yorkie who needs a new home.

Kaylee Rose is thrilled when a neighbor asks if she’ll consider taking in her teacup Yorkie, Valentino. But there are strings attached. The dog’s other caretaker turns out to be Carter Hartley, an arrogant jerk she’ll have to deal with until they decide who keeps the pampered pooch permanently. Kaylee and Carter can’t stand each other even though they both love the dog, but they’re forced to either get along or risk losing Valentino to a heartbreaking fate. 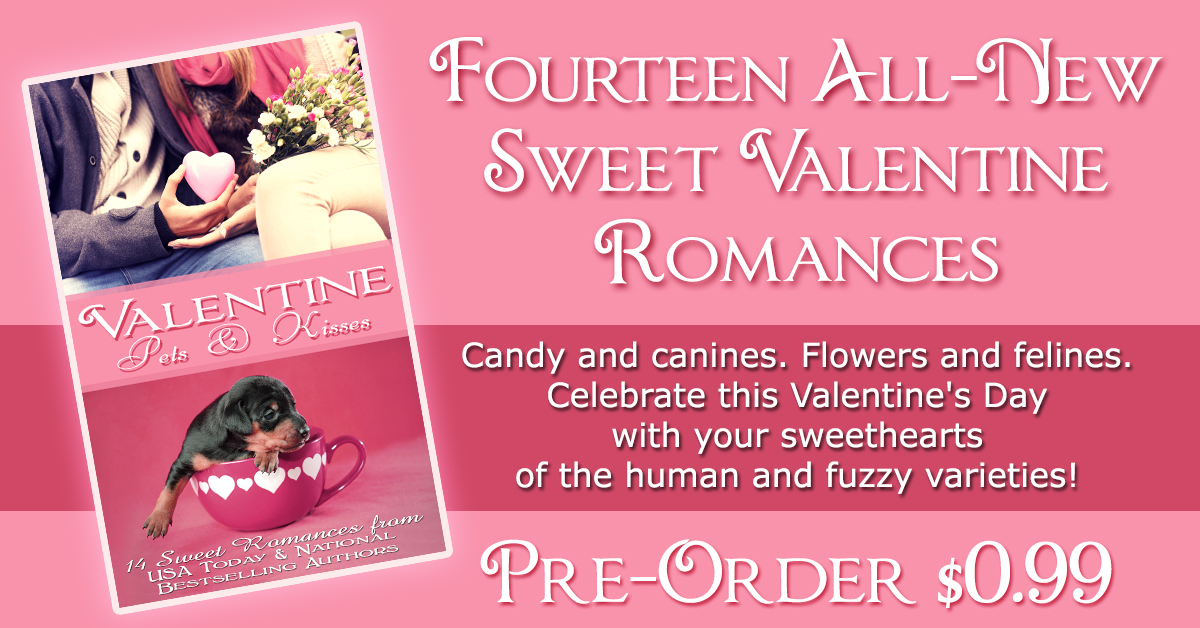 Chat with the authors and win great prizes! Come join the Fun.