Creating chemistry in romance is important because this is what makes the reader root for the characters to find their happily-ever-after.

How do you create great chemistry?

Strong, interesting characters are key to creating chemistry in romance. If the reader doesn’t like your characters all that much, they won’t care if they end up happy.

This often means getting away from stereotypes and adding more depth to characters. Characters need flaws. Nobody likes the perfect, better-than-everyone-else character. Perfect characters don’t have enough conflict to be interesting. A strong character has strengths and weakness that will play a role in the story and their character development arc.

This doesn’t mean no insta-love ever, especially if that’s going to be a source of conflict later when the character realize love at first sight doesn’t mean no problems, but the reason for their attraction should be believable.

Good looks aren’t enough. Being hot doesn’t prevent a person from being an asshole. Draw from personality, compatibility, intrigue, uniqueness…something that will last and create conflict later in the story.

Tension can come in a variety of ways, including miscommunication, lies, secrets, arguments, moving too fast/slow, etc. The key is for these to be realistic and fit with the overall story.

One rumor that’s never fact-checked or confronted and causes the MC to run away without looking back and fall into utter despair isn’t realistic and tends to frustrate readers. Especially if the MC is an otherwise strong and intelligent person.

If a point of tension can be fixed in less than a paragraph, it probably isn’t complex enough to be believable.

There should always be something that can completely ruin a relationship, whether it’s developed from page one or a surprise two-thirds of the way through. The risk that everything could fall apart, and both or one of the characters knows this, will affect everything they do and act as a constant reminder to the reader that they shouldn’t assume everything will turn out all right. 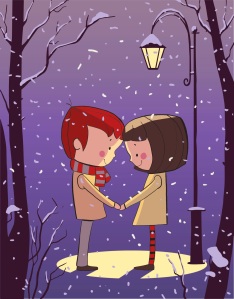 Intimacy doesn’t mean sex, although there’s nothing wrong with sex being part of intimacy. A look or a touch, a meaningful word can build intimacy between characters just as much as physical intimacy. Every time characters are together, give them a moment that notches up their connection in some way.

When characters are not with each other, use internal dialogue, conversations with others, or small reminders/tokens (a piece of clothing or memento left behind) to develop intimacy. Building intimacy should remind the reader of what the characters could be together.

Chemistry shouldn’t be a straight shot to HEA. Nobody likes another person all the time. Having moments where they dislike a trait or action is realistic and lets the chemistry ebb naturally. A thoughtful or sweet act will bring it back up, maybe even stronger. The give-and-take keeps readers interested and engaged.

Keep the roller coaster ride to a reasonable level that won’t throw readers off the rails. Ups and downs are natural and important in story building. The swings shouldn’t be so drastic you give readers whiplash, though. Keep the chemistry moving in a steady, upward direction toward the climax, with believable bumps and dips along the way.

Character relationships should model reality while still working with in the overall plot to allow character growth and development.