If you’re planning at trip to Mesa Verde National Park and hoping to explore the Spruce Tree House cliff dwelling, one of the largest and most popular cliff dwelling sites at the park, you’ll be limited to viewing it from a distance. Why? While we want all our visitors to experience the cliff dwellings, keeping guests safe is our top priority. Recent rock falls at the Spruce Tree House site prompted the decision to close it to the public for the first time in 50 years.

Because the alcoves containing the cliff dwellings were formed by natural processes that are still at work, dwelling sites undergo change over time. Due to erosion, naturally forming cracks exist on the mesa above the Spruce Tree House, and continue to spread. One very large crack spans the entire length of the Spruce Tree House alcove, and has been the source of rock falls before.

In 1940, cracks and instabilities were discovered, and actions were taken to slow the erosion process. Plants and debris wedged in the cracks that were making them wider were removed. To help protect the cliffs even more, a protective covering was built to waterproof the system of cracks and hold off additional erosion.

That covering worked for two decades, but in 1960, a 10-ton rock fell from the south end of the cliff overhang, hitting the nearby public trail and part of the Spruce Tree House site. Trained climbers pulled down a loose, five-ton rock in danger of falling to prevent it from doing more damage, and cleanup began. The previous covering put over the crack was removed and replaced with an anchoring system that would hopefully prevent the cracks from widening. These 42 anchors, up to 16 feet long, were drilled into the cliff face to anchor the arches in place, then the crack was filled with gravel and cement. This system held for many years, until recently.

In August of 2015, several small rock falls at the south end Spruce Tree House cliff dwelling caused new safety concerns. Hiking to the site was temporarily closed while park officials evaluated the danger of more rock falls. Unfortunately, their evaluation made it clear the site was too dangerous for visitors. In October of 2015, officials decided the site would remain closed to the public until the safety of the area could be studied in detail.

Wasting no time, the evaluation of the area began the following month, and was completed by a specially trained climbing team made up of members from several National Parks. During this project, the system of cracks above the arch was inspected, and a large amount of loose rocks and debris were removed. The cleanup revealed that the inner areas of the cracks were soft due to water leaching away minerals necessary for keeping the rocks strong, and further damage was possible. The risk of continued cracking and falling rocks made it impossible to reopen the site. A full geotechnical assessment will likely be conducted in the future but, for the time being, Spruce Tree House will remain closed to the public.

Even with the closure, this beautiful monument can still be enjoyed by park visitors from a distance. Overlooks near the Chapin Mesa Archaeological Museum provides views of the Spruce Tree House, and Rangers are available to answer any questions visitors may have. 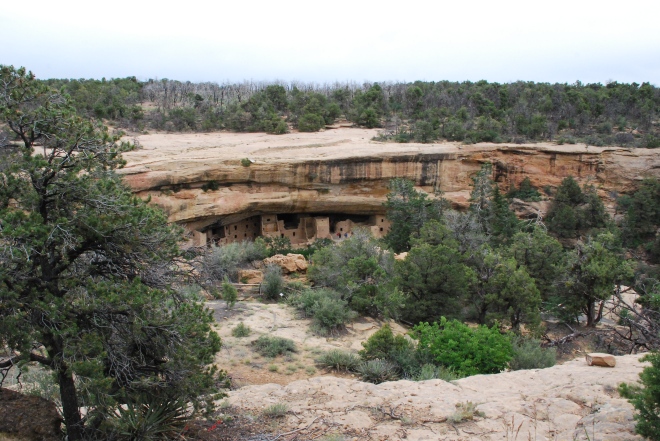