Before anyone asks, yes I am also working on Wicked Revenge and am hoping to have a mid-April release date, but I did have a few other deadlines to meet before then, including this one:

The Eliza Carlisle Mystery series is one I’m really excited about. The first book, TROUBLE MAGNET, will be releasing next month, and a crossover novella called THE CATALYST will also release next month as part of the Sydney Rye Kindle World.

More on that later.

I’d love people’s thought on the blurb for TROUBLE MAGNET, which is a humorous murder mystery. Let me know if it intrigues you, needs work, etc. 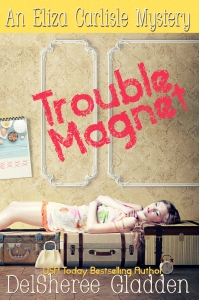 Eliza Carlisle has the unwanted talent of attracting trouble, in all its forms. That couldn’t be truer than when she moves into the most bizarre apartment building on the planet. Weekly required dinners with the landlord and assigned chores are bad enough, but the rules don’t end there. Top most on the list of requirements is NO physical violence against the others residents.

There have been issues.

The young manager, Sonya, claims that hasn’t been a problem recently, but Eliza comes home from her first day of culinary school to find a dead resident, her next door neighbor looking good for the crime, and a cop that seems more interested in harassing her than solving the case.

All Eliza wanted was to escape her past and start over, completely anonymous in a big city. That’s not going to be so easy when the killer thinks she’s made off with a valuable piece of evidence everyone is trying to get their hands on. The ultimatum that she turn it over to save her own life creates a small problem. Eliza has no idea what the killer wants, or where the mysterious object might be.

If she can’t uncover

Let me know what you think!