My daughter has been asking for a dog since she was old enough to say the words. She’s eight now…so that’s a lot of, “Can I have a puppy?” requests over the years.

Finally, we broke down and decided it was time to get a dog. Our kids are 8 and 11, old enough to help out and take care of a dog. So we went to the local shelter after having perused the list of dogs online and headed out to see our top picks. Turns out that the two we liked most were both in quarantine, one for biting people and one for being “aggressive toward people.” 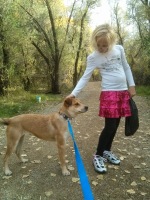 We ended up settling on this 2 year old brown shepherd mix. Poor thing did not want to be a pet. At all. We tried everything to keep her in the yard, but she escaped everything. She was also terrified of just about everything. She hated coming in the house, had no clue how to play with kids other than trying to tear their clothes apart and bite at their arms, and she chewed up whatever she could get her teeth on. After a month, we finally have to give up and take her back to the shelter.

After our first experience, we decided what we needed was a puppy that we could train and have grow up as part of the family. So, here’s our new puppy, Finn. The shelter said he was a lab/retriever mix, but he looks more like a boxer to us.

We adore Finn, but for anyone thinking about getting a puppy, I have just a few words of wisdom to help prepare you. 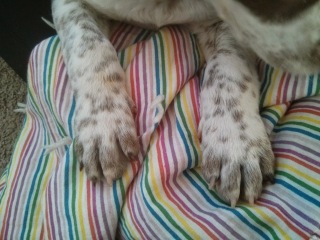 1. Puppy teeth biting you feels like a dozen tiny needles stabbing into your flesh. They are seriously sharp! Good thing they’re only nibbling.

2. Puppy claws are equally sharp! Between the claws and the teeth, I look like I’ve been in a cat fight recently. Oh, and FYI, puppy claws aren’t all the same color. I thought that was neat 🙂

3. Puppies make lots of messes, but it’s totally worth it for us to have a dog that actually likes us and wants to be part of the family.

4. If you thought you were done baby-proofing your house, think again. Shoes have to up off the ground, cords and wires hidden, odds and ends can’t be left on the floor to be chewed on. 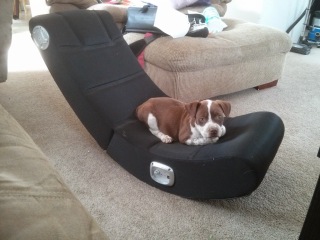 6. Puppies haven’t quite gotten the hang of doing their business and not stepping in it immediately after. Consequently, they get a little smelly, which is a problem if the shelter just neutered him and you can’t bathe them for seven days.

7. Walking on a leash is not a skill puppies have without training. Poor Finn had no clue what was going on when we put a collar and leash on. Baby steps.

8. Puppies don’t like to be alone, especially at night. Poor baby cries when we have to kennel him at night, and whines if he’s not in a room with someone else. Luckily my daughter doesn’t mind keeping him company. 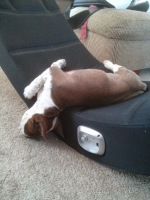 9. Puppies are super clumsy. It’s pretty cute to watch 🙂 Even little steps can sending them tumbling onto their noses. 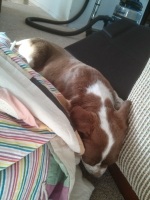 10. Puppies sleep a lot, and sometimes in strange positions! Finn is also a pretty light sleeper, so the poor guy gets woken up a lot.

Clearly every dog is different, and finding the right one for your family isn’t easy. We’re loving our new puppy, though, and it looks like this is going to be a great fit!

Tell me about your pets!