Usually my Monday posts are writing related, but today I wanted to take a minute to share with you some of the events of last week.

On Monday afternoon I was called away from work by my dad by news that my Grandma Esther, who had fallen the week before and fractured her pelvis, had coded when her heart stopped, but had been resuscitated. She had a do not resuscitate order in place, but because the paperwork hadn’t been converted to the newer digital charts, she was revived, but had not regained consciousness. It was touch and go over the next twenty-four hours while she regained consciousness briefly but her body continued to decline. On Tuesday afternoon, she passed away and joined my Grandpa Ivan in the eternities.

I loved my grandma dearly, and being with her the last few hours of her life is something I will never forget. Even though it was incredibly difficult to watch her suffer and be in pain when I couldn’t do anything to help her, I felt comforted knowing she was surrounded by family and that those who couldn’t be there were praying for her.

In the last three years, we’ve had four funerals between my family and my husband’s. It’s difficult to say goodbye to family members that have given so much love in their lives, but my grandma’s passing was especially difficult for me.

My grandparents moved in next door to us when I was seven years old. From that point on, they were a constant fixture in my life. They were the loves of each other’s lives. Everyone who saw them together knew that. The couldn’t have made it through seventy years of marriage if they weren’t. They were such an example of what a marriage should be. 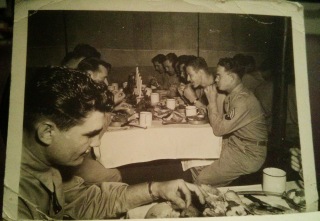 My grandpa told us stories of his days in the military, operating a VFW outpost in Colorado, becoming the mayor of the little town of Oat Creek, and helping to get the bridge repaired after a huge flood nearly destroyed the town. My grandma would sit quietly and let him tell the stories, but she lived through every single one of those events with him, and it wasn’t always easily.

While my grandpa was overseas, she worked and raised her children largely on her own. She showed

her amazing strength through years of trials, never complaining and always lending a hand to those in need even when they had very little themselves. Accepting help was difficult for both my grandparents, but giving it was second nature. They affected everyone they met for the better.

As I was growing up, she was my role model. Even at thirty years old, she’s still the person I want to be when I grow up. I’ve never known a stronger, more resilient, more giving, loving or more determined person. There was nothing she couldn’t do, no difficulty she couldn’t overcome…all without complaint. At ninety years old and after years of battling leukemia, she was still living in her own home, taking care of the neighborhood dogs that would wait on her porch for treats and love every day. She refused to move in with my dad and let him care for her the last few years because she didn’t want to be a burden to him. She wasn’t stubborn–she didn’t like that word much–but she was determined. She wanted to live her life on her own terms, and she did.

Esther Mae Shrum was an amazing woman. I wish everyone could have known her. Her influence in my life helped guide me as a child, and will continue to guide for the rest of my life. She was one of those people that you didn’t forget after meeting them, and I hope I can one day be like her.