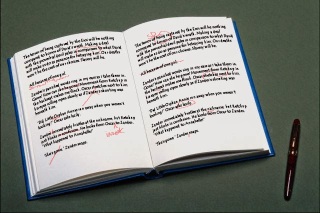 I don’t know how most authors feel about editing, but it’s not my favorite part of the writing process. It can be tedious, and I usually end up feeling rather foolish when I get my edits back and see the same mistake pointed out over and over again.

At least, that’s the case when you actually work with a good editor.

It’s been a while since I’ve worked with an editor who actually knew their stuff. Cynthia Shepp, who not only has her own freelance editing business (Cynthia Shepp Book Reviews and Editing), she is also the fabulous editor for Clean Teen Publishing, one of my publishers. Aide from the lovely Phyl Manning, who passed away this year, I’ve had a heck of a time finding an editor who is thorough and truly an expert in their field.

I was thrilled when Wicked Power was recently handed off Cynthia, because I knew she was top notch. When I got edits back from her and I didn’t find an error free page until I got to page 95 in my manuscript, I had mixed feelings. Cynthia clearly did a great job and caught all my errors, but I was rather annoyed at myself because the errors she fixed were pretty much the same four errors over and over again.

So, to serve as a reminder to myself, and possibly to keep other authors from tripping up over the same things, here’s what I learned from Cynthia.

Ellipsis
Three dots. Not too difficult, right? It’s the spaces that were getting to me this time.
There should not be a space between the word and the ellipsis. Ex: I want to…
There should be a space after the ellipsis and before the next word. Ex: The kids are… somewhere.
There should not be a space between the ellipsis and final punctuation, but their should be a space between the last word and the ellipsis. Ex: How are we supposed to …?
Hyphens
“Compound adjectives and/or compound modifiers need to be hyphenated when preceding the word it modifies, unless one of the modifiers is an adverb ending in –ly. They don’t if after the noun.” ~ Cynthia
Ex: Three-foot platform, petal-soft, miniature-sized ballerinas
Also, I may be the only who frequently forgets this one, but five-year-old sister should also be hyphenated.
I and Me
Poor Cynthia had to fix so many “you and I’s” and “me and my family’s” because I can’t ever seem to get this rule straight.
I kept writing things like “With that, the privacy window rolls up and secludes Ketchup and I.”
Another rule I learned, or maybe re-learned, is that the person who is speaking should be put at the end of a list of people whenever possible.
For example: Aside from my siblings and me… rather than Aside from me and my siblings…
Commas
On every other point, Cynthia was able to explain why what I had been writing was incorrect, and it made sense. I’m sorry to say, I’m still a mess on commas, and I fear I always will be.
I don’t know why commas are so difficult for me, but they are. I’m good with commas used for series (I was taught to use the Oxford comma), and setting of introductory elements. Here’s some of what I get tripped up on when it comes to commas:
1. Apositives and Parenthetical Elements. This trips me up a lot, because what is or isn’t essential to a sentence isn’t always easy to decide. I read a sentence one way, and it makes perfect sense, but my husband will read it and disagree. I’m sure most of that is because I know what the sentence means, so I’m reading it the way I want it interpreted, but it’s hard to read it any differently.
2. Strong and Weak Clauses. Again, this seems open to interpretation, and for some reason, I seem to interpret it differently than other readers.
3. Separating Strong Clauses. This one can depend on the length of the sentence, but it’s still be tricky, in my opinion, because sometimes the way I read it makes me unsure. Strong clauses should be separated by a comma when they’re joined by a conjunction.
I’m sure there were other rules I was breaking, and will continue to break, but I will do my best to send less commas errors to Cynthia the next time we work together!

What grammar and punctuation rules do you find yourself breaking regularly?