Arrabella thought she was done with dreams, done with curses and the threat of death.
After surviving the ancient Aztec curse that had plagued her family for centuries, Arra was more than ready for her new life in the boring little town of Grainer, Maine. Boring and small sounded perfect…but she should have known better than to think it would last.
The dream was odd, but Arra passed it off as nerves about starting school in Grainer. Her boyfriend, Tanner, was there to distract her…and get her into a little trouble as well. He pushes the dream out of her mind until they walk onto the school campus and see her. The lonely girl from Arra’s dream.
Tanner’s reaction is fierce. He won’t risk losing Arra again and demands she stay away from Sibeal, but Arra can’t stop thinking about her haunted expression. What if she can help her? Arra can’t just walk away and let whatever curse has a hold of Sibeal claim her without trying to stop it. But what if Sibeal deserves the punishment?
Arra’s battle to make the right choice about Sibeal only gets harder when she is forced to turn to the person in town she likes least for help. Sebastian Wallace is arrogant and irritating, but he’s seems to be the only one who can help her. As Arra tries to determine what the right choice is, she finds out saving Sibeal may be the least of her problems. 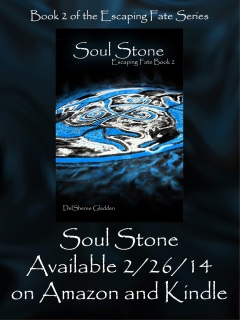 Get your copy now on Amazon!

Meet the Cast of Soul Stone! 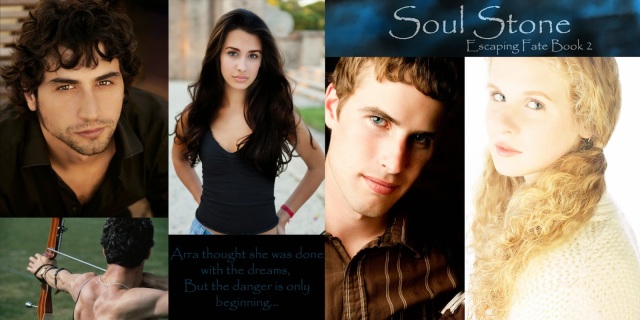 Get the first book in the series “Escaping Fate” FREE on Amazon February 26th-21th!

Get Escaping Fate FREE on Amazon!

DelSheree Gladden lives in New Mexico with her husband and two children. The Southwest is a big influence in her writing because of its culture, beauty, and mythology. Local folk lore is strongly rooted in her writing, particularly ideas of prophecy, destiny, and talents born from natural abilities. When she is not writing, DelSheree is usually reading, painting, sewing, or working as a Dental Hygienist. Her works include Escaping Fate, Twin Souls Saga, The Destroyer Trilogy, and Invisible. Look for, Wicked Power, the next book in the Someone Wicked This Way Comes Series, and Soul Stone, book two in the Escaping Fate Series, coming 2014.
Connect with DelSheree Online
Goodreads : DelSheree’s Blog : DelSheree’s Website : Facebook : Twitter : Wattpad : Amazon : Pintrest