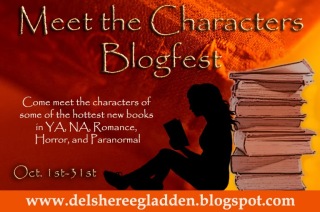 For today’s surprise post, I thought I would interview my characters so you could get to know them better in a personal way.  We have Corrine Lamb and Jamie Armstrong from the novel Hush Puppy by me, Lisa T. Cresswell.
First, thanks for talking to me, guys. It’s a pleasure to meet you.
Could you tell me a little about how you first met?
Corrine: Jamie’s dad brought him over to the diner where I was working ‘cause he had to fix the sink and he wouldn’t buy Jamie lunch. I felt kinda sorry for him, so I snuck him some hush puppies.
Jamie: They were good too! (laughs)  That’s why I call her Hush Puppy.
What did you initially think of each other? Love at first sight? Not on your life? 🙂
Corrine: I think my exact thoughts were “Oh Lord, not another redneck!” But he grew on me.
Jamie: Hahaha! You’re so mean! I thought you were the prettiest thing I’ve ever seen.
Corrine: Oh shush. 😉
Can you tell me a little bit about where you come from?
Corrine: You’ve heard the expression “Armpit of North America”? That would be it.
Jamie: Oh, Carolville ain’t that bad.  It’s just extremely small and backwards.  But you have to admit the lake is nice.
Jamie, if you had to describe Corinne in three words, what would they be?
Oh gosh, that’s hard. I guess I’d have to say: smart, sexy, and…smart.
Corinne, same question.
You’re just as smart as me. Three words? How about: romantic, talented, and smart?
What’s the hardest thing you’ve ever had to face, either together or apart, and how did you get through it?
Corrine: I think my hardest time was when I thought Jamie didn’t love me anymore, or didn’t love me enough to stand up to his friends. That really hurt.
Jamie: See, Corrine thinks I’m smart, but I’m really kinda stupid in a lot of ways.
Corrine: You are not!
Jamie: Anyway, my hardest time was when Corrine shut me out. I deserved it, but it still killed me. I don’t know how I got through it. It wasn’t pretty.
If either of you could have any dream come true, no matter how fantastic, what would it be? Dream big!
Jamie: I know what Corrine would do! (laughs)
Corrine: I’d visit every single place on my map. I have this map of the world and there’s pins in every place I want to go. What’s your dream, Jamie?
Jamie: To go with you. J 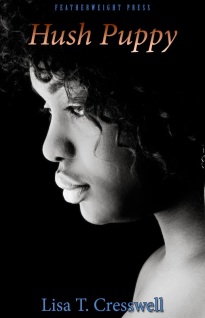 Hush Puppy is the story of Corrine Lamb, a seventeen year old, black girl, and Jamie Armstrong, a poor white boy, living in a backwater North Carolina town.  Intelligent Corrine, abandoned by her mother, and artsy Jamie, forced to play football by a redneck father, both dream of leaving their podunk town and never looking back.
Their shared love of literature and a dream of a better life brings them together and a romance blossoms between them in a secret place of their own in the steamy North Carolina woods.  When Jamie is involved in the accidental death of a white girl, he’s terrified of his abusive father.  Corrine takes the blame to protect Jaime, with dire consequences for herself and her dreams of the future.  Her life in danger, Corrine’s left wondering if Jamie ever cared about her at all.
Short Bio
Lisa T. Cresswell is a professional archaeologist who works in Idaho and dabbles frequently in young adult literature. Originally from North Carolina, her stories are often inspired by memories of growing up there. You can see more of her work at www.lisatcresswell.com