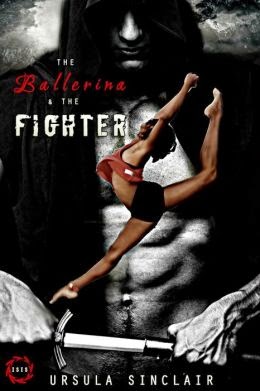 The Ballerina & The Fighter (Book 1)
A New Adult Contemporary
By Ursula Sinclair
Interview With Maze
My gaze swung to the door, I watch as a handsome young man walks into the restaurant and speaks to the server. She turns in my direction and points. He nods and heads toward me. I stand up and take his outstretched hand, noticing at the same time that the two hostesses at the counter are still checking him out. I smile, not blaming them. At six two of cut lean muscle, gray storm colored eyes, hair various shades of brown that looked like he combed it with his fingers, Maze is drool worthy. I focus on him. ‘Thank you for meeting me here today, Maze.’
‘No problem, Ursie. Anything for you.’ He flashes those killer dimples at me. I can’t help it I grin and we sit down. After placing our food orders. I take out my iPad and pull up my questions. ‘I just have a few questions for you. Are you ready to start now?’
He takes a drink of water. “Yeah. Go right ahead.”
Tell the reader a little bit about yourself.
My name’s Maze Chang I’m twenty-three. Yeah I know. I don’t look Asian. But I was sorta adopted by my sorta step-father, who was really more father to me than my sperm donor. Anyway, long story short, Joe, my step-dad is Chinese and he and my mom were never married but after she died he took care of me and legally changed my surname.
Pretty cool. What else can you tell us about yourself?
Well I have bit of a temper. Can’t stand stupid people so it’s probably a good thing I’m a professional MMA fighter. I can channel that natural aggression. Oh that’s mixed martial arts but in a purer sense. Not this rolling around on the floor shit you see on YouTube or TV. I fight bare fist and feet. And also with swords. No real rules. Think old school. If you ever saw that old movie Enter The Dragonthen you know what I mean. People get seriously hurt and worse in the forums I fight in. They’re more arenas than cages. And it’s not exactly sanctioned by any legitimate fighting organization. It’s underground and controlled by a Triad group.
How long have you been a fighter, and have you ever lost a fight?
*He shakes his head* . No never lost a fight. I’ve been training since I could walk, but fighting pro for the last eight years.
You mentioned your fights are controlled by a Triad group. Other than as a fighter are you involved with them?
I try not to be but the less said about that the better.
O.K. Moving on then. Do you have a love interest?
*His entire face lights up into a smile*. Yeah I do.
Can you tell the readers a little bit about her?
That’s easy. Her name is Ivy she’s a prima ballerina and she’s my reason for everything. She makes me wants to be the man she sees when she looks at me.
So do you see yourself settling down?
With her anything is possible.
Okay now for the fun stuff. Boxers, Briefs, or none of the above?
*He grins* Ask Ivy.
Coffee, tea or chocolate?
Oh I definitely am partial to chocolate. Amazing what you can do with it in liquid form. He flashes those dimples at me.
Favorite piece of furniture?
Depends on what room I’m in with Ivy.
Thank you for being here with me today Maze. Is there anything you’d like to add?
*He snorts*. Like I had a choice. But since you have to finish our story I figured I better show up. Seriously though it was a pleasure. So now can you get back to writing and finish my HEA with my ballerina.
I will.
Blurb:
I travel through life dancing.
All I ever wanted to do was dance, as did my best friend. We’d made so many plans together, but one night an explosion changed it all. Only one of us survived, and I promised myself I’d succeed for us both. And I did, until an accident almost ruined my career, but Maze came back into my life when I needed him most. He pulled me out of the depths of my despair. But could I save him now?
I travel through life fighting.
It had always been Ivy; from the first moment I saw her leaping through the air like she had wings to lift her from the ground. But she was my dream, something I wanted more than anything else in my life. I promised myself I would stay away from her. Violence followed me everywhere and I tried to keep her far away from it. She was my point of illumination in the dark tumultuous world I lived in. But I could not stay away from her. Not when I knew she needed me. As much as I needed her. But could she accept me as I am?
To read Maze and Ivy’s story please find them here:
http://www.amazon.com/The-Ballerina-Fighter-Book-ebook/dp/B00DQ6VI60/
http://www.barnesandnoble.com/w/the-ballerina-the-fighter-ursula-sinclair/1115929791?ean=2940148217596
https://www.allromanceebooks.com/product-theballerinathefighterbook1-1228402-149.html
http://www.smashwords.com/books/view/334714
http://store.kobobooks.com/en-US/ebook/the-ballerina-the-fighter-book-1-1
To learn more about LaVerne Thompson writing as Ursula Sinclair visit her here:
http://lavernethompson.com
http://facebook.com/groups/lavernesnews
http://twitter.com/lavernethompson
http://isisindcblog.blogspot.com